From the time Pierre-Paul Andriani was a child growing up on the island of Corsica, he dreamed about creating cars.

Pierre-Paul has spent 12 years at the General Motors Technical Center in Warren (Michigan) and rose to the title of Senior Sculptor in Interior Components. During that time he taught digital modelling for transportation design at his alma mater, the College for Creative Studies.

​In the summer of 2014 Pierre-Paul moved to the West Midlands in the United Kingdom. He was hired by Tata Motors European Technical Centre (TMETC) as their new team leader. He was promoted in 2016 as their senior manager for digital modelling. Highlights at TMETC include the concept cars 45X and EVision as well as the production modelling of the Tata Nexon.

Pierre-Paul has a bachelor in mechanical engineering from the University of Virginia, a bachelor of industrial design from the College for Creative Studies and a masters of business administration from New York Institute of Technology.

A trained public speaker thanks to Toastmasters, Pierre-Paul has spoken in public at conferences in the United States, the Netherlands, Germany and the United Kingdom. 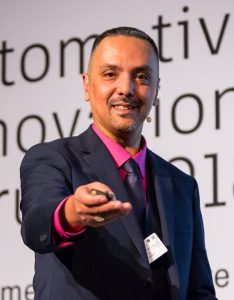